Blog
You are here: Home1 / Blog2 / General News3 / What Prevents The Thomas Fire Findings From Being Public?

To understand 2018 begins by understanding December 2017 and the Thomas Fire. The fire destroyed 535 houses in Ventura. It scarred the hillside, displaced families, and created unprecedented demands for services. It was Ventura public safety’s finest hour. Police and firefighters performed heroic feats. As a result, no Ventura residents died in the fire.

Thirteen months later, the report card on Ventura city government is not as good. The city did not continue the success public safety exhibited during the fire. Ventura had the opportunity for a significant economic stimulus but failed to capitalize on it. Rebuilding the homes will stimulate the local economy by $350 million. The only thing standing in the way of that economic windfall is the city. In the intervening time, the city issued 165 building permits. The city staff beefed up with contractors to help with the workload for these results. The city staff wasn’t entirely to blame. The City Council waffled on second-story height restrictions for rebuilding victims’ homes. Indecisiveness delayed the rebuilding process for many.

What are the lessons we learned from the Thomas Fire? Good question. Thirteen months later we still don’t know that answer.  The city has yet to produce a report on its findings. City Manager Alex McIntyre says, “We may get something in draft this month [December 2018].” More likely, it could be next year. Understandably the city must be cautious. A critical point under review is the subject of litigation against the city. Homeowners are suing Ventura for lack of water and pressure to fight the fire in its early stages. Still, the failure to produce a report makes Ventura appear plodding and bureaucratic.

All You Need To Know About Local Campaign Issues 2020 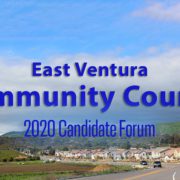 Watch This Year’s City Council Candidates Battle In A Forum

Ventura’s Water Crisis Is A Study In Procrastination

Is The Council’s District 4 Replacement Plan The Best Solution?

What You Missed In The 2019 State-Of-The-City Speech

Do You Know The Truth About Ventura’s Spending On Conferences?
0 replies